Aloe arborescens and aloe vera are the most common and best-known kinds of the aloe plant that is otherwise known as sibr, or sabbar. There are over 300 classified varieties, growing wild in the desert, though they can also be cultivated in gardens and pots.
The succulent thorny green plant is known here as sabbar, deriving from the word sabr, meaning patience in Arabic for its capability to sustain drought and heat in the harsh climate of the desert. The transparent gel-like sap (over 90 percent water) is used for remedial purposes. The resin, which is left to dry, is called sibr in Arabic. It comes in round solid reddish-brown hard patties, available in the herb and spice market.
Sibr was noted in the memoires of the British adventurer Sir Richard Burton on his celebrated pilgrimage to the Holy cities of Makkah and Madinah in 1853. The plant was often grown in Muslim graveyards. Its popularity comes from the fact that it requires minimum watering and sustains extreme heat and cold climates.
Travelers and camels crossing the desert quench their thirst and nourish their bodies with the life-saving aloe gel and its juice. It does not only replace water but also food due to its high nutritional value.
The succulent plant grows a tall majestic flowering stalk in its center during the winter season. The green thorny thick leaves, or branches, envelop a transparent viscous resin. The gel is valued in this part of the world for its potency and medicinal qualities.
Traditionally, sibr, the dark brown dried sap, is prescribed for diabetics to lower blood sugar levels. It is also applied to heal stubborn wounds, in its fresh or dried form. It is taken orally as a laxative to relieve constipation; cleanse the intestines; regulate bowel movement; and soothe digestive disorders. Dried aloe is diluted in water and taken on empty stomach to control elevated blood sugar levels and cleanse the digestive tract. It is believed in Hejaz, the Western region of Saudi Arabia, that oral overuse can cause damage to the liver in the elderly.
Wounds and cuts get washed with water and applied with the gel or the diluted dried cake to cleanse and speed healing. Sometimes, a little alum (shabba), or myrrh (murrah in Arabic) is added to stop profuse bleeding and to promote healing. It is also used to cool burns and enhance healing and recovery. Most sunburn gels contain aloe today.
Externally, the gel-like sap is applied to the hair to enhance growth and texture; increase shine; and minimize hair loss. Traditionally, it is mixed with henna (a natural hair coloring plant), garlic, and coconut and a little castor oil. The mixture should be left for some time on the hair. Warning: if your hair is white or blond, henna may give it a ginger red tinge. The mixture can be used without the henna. Most modern beauty products contain aloe; either to improve skin or hair conditions.
It is said that ancient Egyptians may have used aloe to embalm their mummies, which have lasted thousands of years. To protect her skin from the sun, the famous Queen of Egypt, Cleopatra, applied the gel as sunscreen (coconut and sesame oils give the same effect). It was also applied to soothe and heal severe sunburns and burns. The ancient Egyptians used aloe to cleanse the digestive tract and detoxify the body. The Persians used it for its laxative effect, too.
The well-known Arab philosopher and physician Al-Kindi wrote about aloe’s anti-inflammatory properties in his medical encyclopedia. He recommended it for eye infections and orally for inflammatory and depressive conditions as well as for detoxification.
Modern science has revealed aloe’s secret of active, healing, and effective ingredients, supporting Al-Kindi’s theory. The plant contains polysaccharides and anti-inflammatory phytonutrients that are healing and detoxifying. They are found in abundance in the water-soluble transparent resin of the thick thorny green leaf.
The aloe gel offers complex carbohydrate molecules (polysaccharides), which act as natural skin moisturizers. Its astringent and emollient effects help maintain a healthy skin. They also heal wounds, sunburns, bedsores, and burns; stimulate cell regeneration; and reduce inflammation and repair damaged tissues caused by radiation therapy. The components also eradicate warts without leaving scars.
Aloe’s antifungal effect makes it ideal for treating yeast infections when taken orally or applied directly on the skin or nails. It also has anti-viral properties. When taken internally as juice, it lowers cholesterol; promotes blood circulation in the lower parts of the body; relieves and coats stomach ulcers; aids in the process of elimination; and soothes hemorrhoids.
Dentists recommend aloe mouth rinse for dental, gum and oral surgeries and diseases. Aloe is also effective on insect bites and skin irritation or allergies.
In health stores, aloe is found in the forms of juice and supplement. Due to its healing virtues, aloe is found in the composition of many cosmetics, skin lotions, hair treatment products, toothpastes, gargles, and creams for sunburns, rashes and skin irritations.
Aloe may sometimes produce skin allergic reactions in certain people. If you are one of them, apply a small amount behind the ears or under the arm. Stop using it, should a rash appear or stinging sensation is felt. Pregnant women should not take aloe orally, due to its purgative effect that could trigger miscarriage or induce labor. 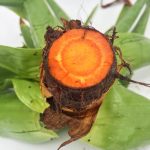