The galactolipid GOPO is a key component of rosehip extracts developed to treat joint health. This natural anti-inflammatory compound is derived from both the seeds and fruits of Rosa canina. GOPO is the only rosehip derived compound to have been rigorously evaluated in randomised controlled clinical trials (NICE, 2014). This natural anti-inflammatory is emerging as a promising treatment for osteoarthritis (Cohen, 2012).

Osteoarthritis is an inflammatory condition typified by damage to cartilage, underlying bone and inflammation of the tissue lining the joint. It mostly occurs in the knees, hips and small joints of the hands. The pain affects mood and mobility, leaving sufferers disabled and markedly reducing their quality of life. It is estimated that over 8 million people have sought treatment for osteoarthritis in the UK alone. This represents about one third of the population over the age of 45 years (Arthritis Research UK, 2015). A variety of different treatments exist for the condition, however, an alternative to over-the-counter analgesics is needed, due to new evidence of their toxicity. According to Arthritis Research UK, over 60% of people with arthritis have tried complementary and alternative medications, this reflects the chronic nature of the condition and the dissatisfaction with long term use of prescribed treatments.

The efficacy of the GOPO extract as a natural anti-inflammatory has been well researched. This extract has been the subject of a number of double blind, placebo controlled trials involving hundreds of osteoarthritis sufferers (Christensen et al, 2008). A meta-analysis of data from three prominent studies confirmed that GOPO offers “significant and robust joint pain relief, enabling a reduction in the consumption of rescue medications” (NICE, 2014). The following is a summary of some of the clinical data available:

Odd Warholm MD, treated 100 end-stage arthritis patients, in a placebo-controlled trial in the Vestfold Central Hospital in Norway in 2003. All were on a waiting list for hip or knee replacement. He treated approximately half the osteoarthritis sufferers with a standardized preparation of rose hip powder containing GOPO and the remainder with a placebo. The patients took 5g of the preparation per day, for 4 months. Researchers in this study monitored mobility, activities of daily living, quality of life and pain. Warholm et al. (2003) confirmed that rosehip containing GOPO is superior to the placebo. The study demonstrated the ability of GOPO to improve hip joint mobility and decrease pain. 64% of the treatment group reported a reduction in pain while receiving GOPO treatment (Warholm et al., 2003). Although Warholm’s study participants were instructed not to change their intake of rescue medication, those receiving GOPO reduced their consumption of non-steroidal anti-inflammatory medication, while a slight increase in rescue medicine intake was observed with placebo. This is particularly significant as numerous side effects have been associated with prolonged use of aspirin, NSAIDS and corticosteroids.

A successive study by Rein et al. in 2004 examined the efficacy of GOPO in the treatment of early stage osteoarthritis. 112 patients with osteoarthritis of the hand, shoulder, hip, knee, or neck were included in this cross-over study. Rose hip powder (5 g daily) or a placebo was given for 3 months. After this period, the group receiving active treatment was swapped to the placebo and vice versa. The patients assessed changes in joint pain and stiffness after each treatment period. General wellbeing, including mood, sleep quality and energy were also assessed and recorded.

Rein et al. (2004) found that GOPO was superior in efficacy compared to placebo in the treatment of stiffness and pain in osteoarthritis and that it continues to alleviate symptoms for months after it was administered. The results in the two arms of the crossover illustrate this strong “carryover” effect. The group which got the placebo first only showed significant improvement during the last 3 month period when they were administered the rose hip powder. By contrast, the second group which got active treatment first showed a very positive effect during treatment, but retained the improvement during their placebo phase (Rein et al., 2004). The same pattern was observed when general levels of well-being were evaluated from the diary records. A corresponding decrease in consumption of rescue medication such as paracetamol, codeine and synthetic opioids was also observed in the GOPO group.

Two further studies conducted by Winther et al., in 2005 and 2013 at Danish hospitals further support the use of GOPO in osteoarthritis treatment. The earlier study examined the effect of rosehip powder on 94 patients suffering from osteoarthritis of the knee or hip. Treatment with the rosehip resulted in a significant reduction in pain and consumption of rescue medications after as little as 3 weeks. Reduction in disability, stiffness and severity of disease was observed after 3 months of active treatment (Winther et al., 2005).

Winther’s 2013 clinical trial focussed on patients with osteoarthritis of the dominant hand. 90% of the subgroup taking rosehip containing GOPO reported reductions of pain in the hand while on active treatment. Active treatment also resulted in a 33% reduction in the consumption of rescue medication. Symptom reduction was still present 3 weeks after a switch to the placebo, further evidencing the long duration of GOPO’s action (Winther et al., 2013).

Examination of data Christensen (2008) from three independent studies by confirms that GOPO offers superior joint pain relief compared to other medications. A comparison of pain ‘effect size’ scores shows the magnitude of efficacy for Rosehip GOPO is three times greater than for paracetamol and significantly better than glucosamine sulphate or NSAIDs (Christensen, 2008).

In summary, rosehip preparations have been shown to exhibit anti-inflammatory and pain reducing properties. Furthermore, chronic or long-term administration of rosehip does not result in the gastric bleeding as is frequently observed with the use of ASA and NSAIDs (Marstrand, K. Campbell-Tofte, J. 2016). Furthermore, Dr Rod Hughes, a rheumatologist at St. Peter’s Hospital in Surrey (UK), when looking at rosehip said;

“We know that osteoarthritis is an inflammatory condition, rather than simply ‘wear and tear’, therefore the anti-inflammatory effects of GOPO may be of benefit”.

Dr John Dickson, a GP Community rheumatologist and advisor to the National Institute for Health and Care Excellence, UK commented;

Winther, K. Apel, K.and Thamsborg, G. 2005, ‘A powder made from the seeds and shells of a rose-hip subspecies (Rosa canina) reduces symptoms of knee and hip osteoarthritis: a randomised double-bind, placebo-controlled, clinical trial’, Scandinavian Journal of Rheumatology, Vol. 34, no. 4, pp302-308 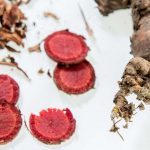 Perfect pelargonium, a powerhouse of nature.Uncategorized 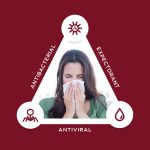